The preview of the tennis championships woos us with its potential 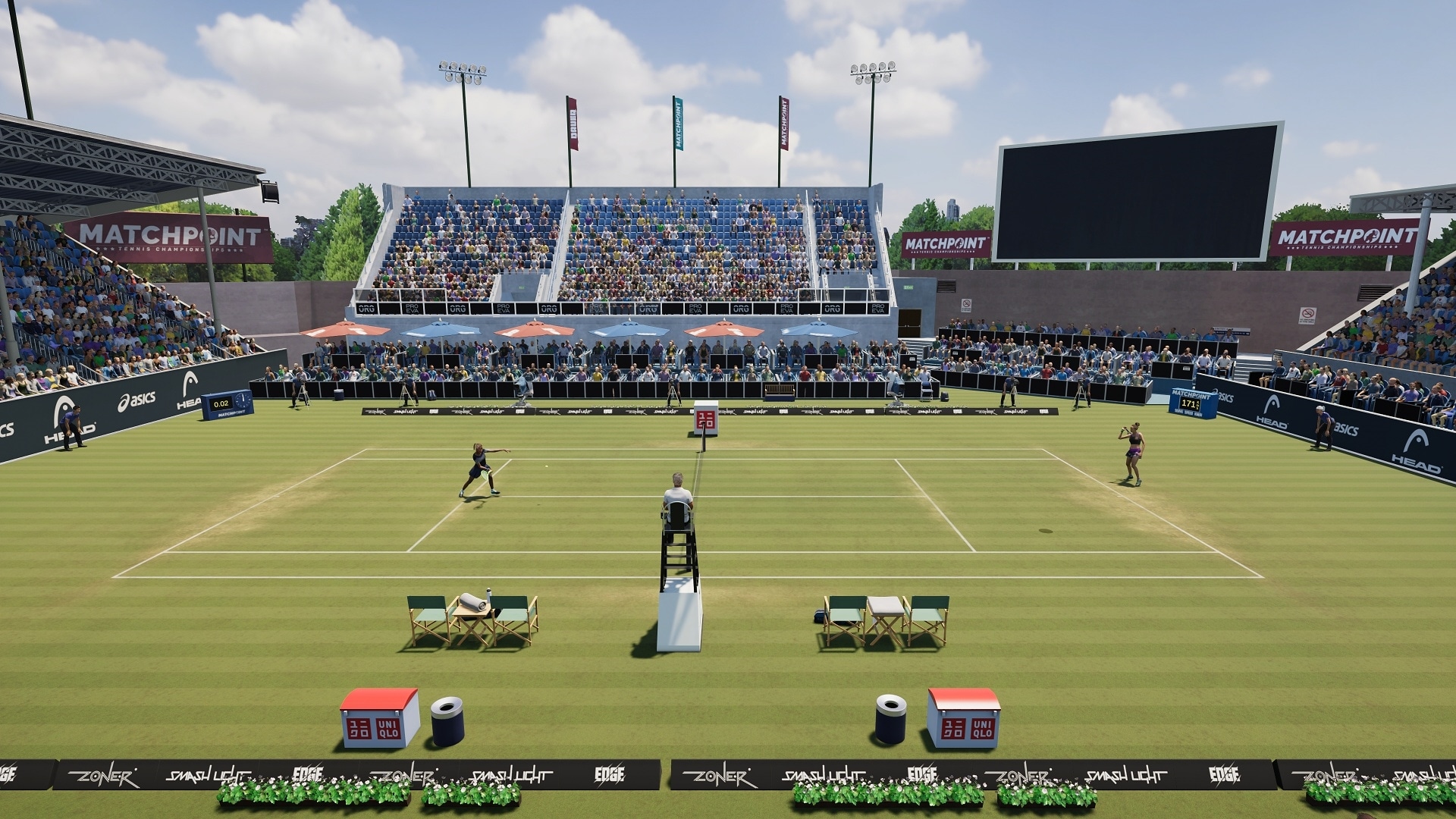 The preview of the tennis championships woos us with its potential

Matchpoint: Tennis Championships aims to bring authentic tennis gameplay and licensed players to Xbox Game Pass in July. We recently saw the game in action with Torus Games, so here’s what you need to know.

Torus Games will release its sports simulation game, Matchpoint: Tennis Championships, on July 7 for Xbox Series X|S, Xbox One, PS5, PS4, Nintendo Switch, PC, and Xbox Game Pass. We recently attended a game preview session to see what Matchpoint offers in terms of mechanics, progression, licensed players, and more. If you’re a sports fan, this might be the one you want to keep an eye out for. We also had the opportunity to ask Torus Games game designer Dave McIntosh and Kalypso Media production manager Marco Pacifico a few questions about their upcoming title.

If, like many, you like to sit down to watch one of the major Grand Slam tournaments every year, you may have wondered what it would be like to walk onto the grass-covered Wimbledon court and play in front of a large crowd. Matchpoint: Tennis Championships aims to give you that experience – well, if you can work your way through the career from newcomer to racquet-wielding superstar, that is.

Torus Games designed Matchpoint to provide a realistic simulation of real-world sport, so shot selection, strategy on the pitch, and thinking about your opponent are the key elements that make up the gameplay. When loading into Matchpoint, you will have the opportunity to practice in the tutorial, which will introduce you to the main mechanics that will become vital in your journey through the game. “On the court, shot selection and moment-to-moment tactics contain many aspects and complexities,” we are told. “However, it’s this area of ​​the game that we’ve focused on the most in terms of capturing the most real moments in professional tennis; it’s not always the best idea to use all the power, you can win. points by simply anticipating your opponent’s next move and countering it before they can pull it back.” Learning when to perform certain actions correctly is the difference between winning and losing, the same way real tennis players must learn and adapt on the fly.

Once you are ready to start your Matchpoint career, you will be taken to the character customization screen. Customization is a key part of Matchpoint: Tennis Championships, and although there are sixteen licensed athletes like Tim Henman, Carlos Alcaraz and Madison Keyes, to name a few, they can only be used in outside of career mode, which requires you to use your own custom character. Right off the bat, you’re offered a number of preset character face shapes, and you can select the nationality, name, and style of outfit they’ll wear.

As you progress through the game and complete Super Tiebreakers, you’ll be rewarded with unlockables, such as new racquets and shoes, as well as a number of different trainers. The bonuses you earn from items feed into the game’s skill system, which improves as you progress through your career. Hiring a coach to help you practice can help boost different skills, such as improving your volleys or serving. Once you hire a trainer, you play a training game that simulates the specific mechanic you’re trying to master.

Character animations in Matchpoint were recreated using a hybrid motion capture system and a professional tennis player. The technology freely chooses the best way to shoot and how to move correctly to position the player character in the most natural way, based on user input. Using motion capture technology, the system has a large motion library to draw from.

With your athlete ready to step onto the court, you are thrust into the Adelaide Open to begin learning how the key mechanics come together. Matchpoint uses a strengths and weaknesses system that unlocks as you play against AI characters. The idea behind it is to simulate how you would analyze your opponent in a real game: what are they good at, what are they not good at, and how can you exploit it? When playing against an AI opponent, you will be notified with a pop-up when you have discovered something new about their playstyle, and this knowledge will carry over throughout your career. If you encounter them again later down the line, you’ll see it highlighted when you load into the match or when you bring up the pause menu. Alternatively, the AI ​​will also learn from you; adapting his style of play to exploit your weaknesses or counter your strengths. Each AI opponent has their own temperament system that goes hand in hand with the strengths and weaknesses system, which forces the AI ​​player to focus on aggressive and defensive play, but again, this can also change over the course of a game. a match because it adapts to your style of play.

Your career in Matchpoint will take you from practice and exhibition matches to Grand Slam tournaments in 65 countries and six continents – Antarctica has been left out for obvious reasons. However, as you progress to stardom, you’ll have to decide where you want to spend your time; tournaments can run simultaneously, so you’ll have to decide which ones you want to enter and which ones to miss, as well as adapt to your practice sessions. It’s a careful juggling of improving in training sessions or improving your rating in tournament rounds, and if you want to start seeing stadiums fill with spectators, you’ll need to use your time wisely.

“The whole game changes when you play against another human, and players will need to be more creative when trying to overcome different strategies.”

Alongside career mode, you can also compete in quick matches against AI opponents and online casual and ranked matches, both of which allow you to use licensed players. Crossplay will be available at launch on every platform, and that’s where you’ll find the most challenging aspect of Matchpoint: Tennis Championships. Before entering the ranked multiplayer part of the game, you will first need to play three unranked matches so that your skill level can be matched with an opponent of equal rank.

Using Photon’s Quantum multiplayer engine, Matchpoint’s online matches are simulated on a remote server, which simulates each player’s input in an effort to eliminate any latency issues that may arise. Only singles matches are available, so if you’re hoping for some doubles action, you won’t find it here.

“Our career mode takes a while for players to reach world No. 1, so that should keep them hooked as they work their way up the ranks,” Torus tells us. “We also believe the game’s multiplayer will bring players back again and again to play with friends or challengers online.”

Although the game won’t be available until July, we’ve already picked up the Matchpoint: Tennis Championships achievement list, which has 23 achievements. “The decision making behind the achievements was based on making them as rewarding as possible for the players,” McIntosh tells us. “For example, one of the achievements is called ‘Comeback Kid’ and is rewarded when the player wins a set after losing five matches.” The list itself seems to focus on career mode, with only a few delving into the realms of online play.

“We can’t wait for players to unlock all the achievements, but we can’t wait to see them beat career mode and become world number one!”

Matchpoint: Tennis Championships launches July 7 on Xbox Series X|S, Xbox One, PS5, PS4 Nintendo Switch, and PC, as well as the Xbox Game Pass library. “Game Pass has many customers around the world and is a great opportunity for players to try out Matchpoint: Tennis Championships,” says Kalypso’s Pacifico. “We are really excited about this opportunity to introduce our new franchise to as many players as possible around the world from day one.”

Having spent some time with the game ourselves, it’s clear that Matchpoint has the potential to find a solid following among Game Pass subscribers and fans of the sport. We can’t wait to see it release on Xbox in just over a month.