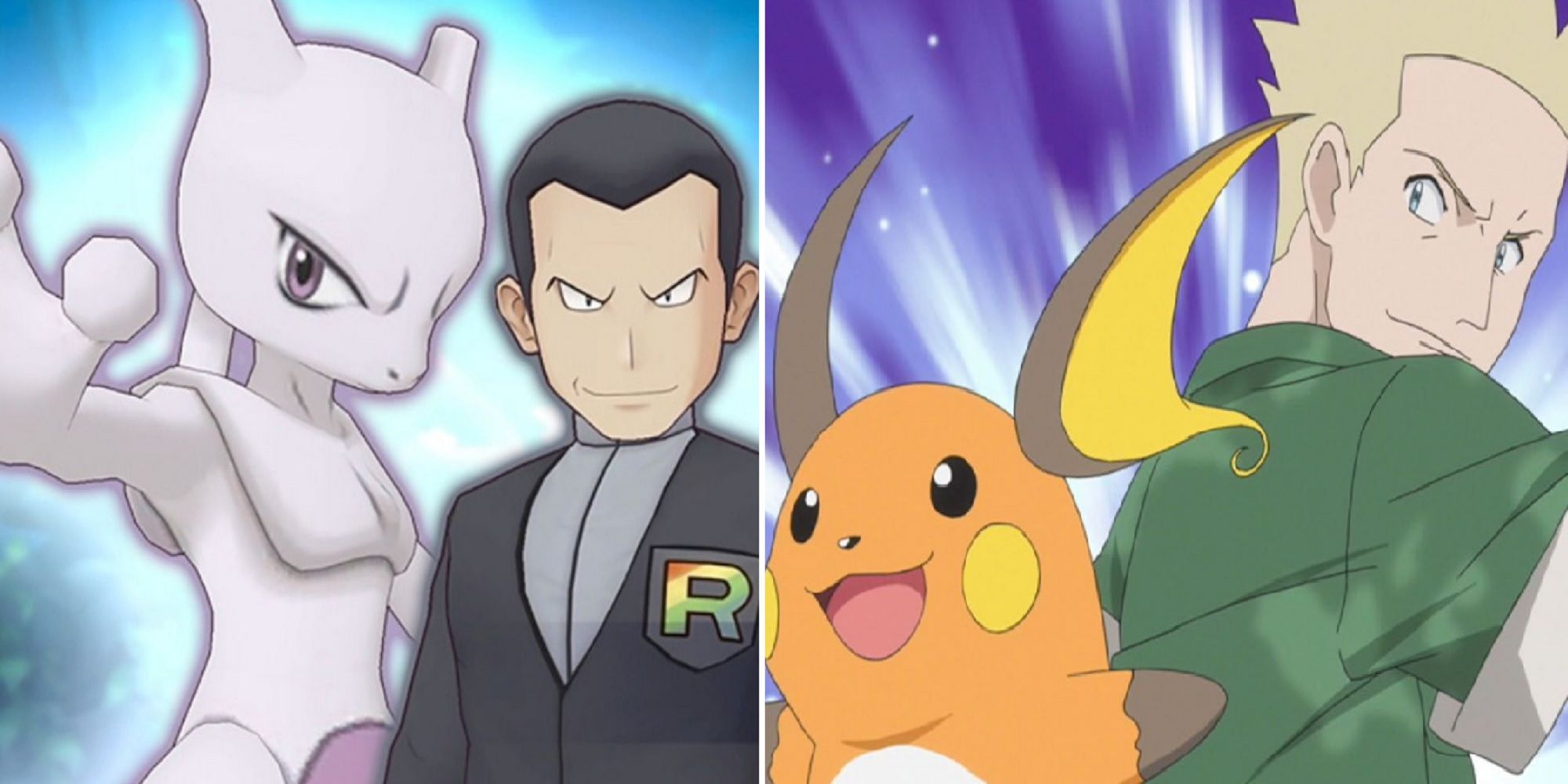 In a mobile game like Pokemon Masters EX, you can expect the best units to be locked behind random summons that require in-game currency. However, there are several exceptional Sync Pairs that can be acquired for free.

RELATED: Pokemon: Pokemon That Appear In Almost Every Game

Worth noting, there are several ways to recruit free Sync Pairs. Some units will require you to collect “Battle Points”, the game’s passive system that allows you to accumulate points for rewards by playing and completing missions. In this case, the reward you need is a Sync Pair or a “BP” voucher. Some of the series’ most iconic Legendary Pokémon will be awarded to you upon completing “Legendary Adventures.” Whether legendary or not, the pool of free units has several high-level options.

There’s no shortage of love for the often underestimated Erika in Pokemon Masters EX. Of her four synchronization options, Tangela might be her best partner. Tangela can both snare using Infest and badly poison opponents using Toxic, making her an all-in-one stalling unit.

Erika’s trainer move also increases Tangela’s Special Defense and Special Attack, allowing her to regain more health by using Absorb. This gives him the survivability needed in the stall, since you rely on poison and trap damage over time to take out your opponents while mitigating damage.

Lt Surge is renowned for using offensive-oriented Electric-types, and this physical support provides your team with a myriad of team-wide attack, defense, and critical hit buffs. They offer a good mix of boosts to keep your team fighting and dealing damage.

Add to that his ability to debuff single targets on demand, some decent healing through his First Aid and Stamina sync grid tile to help Raichu hang on for one last hit, and you’ve got some very useful Electric-type support. . They’re sure to give your team a healthy jolt, but they lack the sheer power and utility of some other pairs.

The antagonist of Pokémon: Black and White returns with a very useful technological unit in the Legendary Pokémon Kyurem. After filling his Sync Grid, Ghetsis can lower both his opponents’ Attack and Special Attack by two stat ranks. His powerful 4 gauge move, Glaciate, hits all opponents, reducing their speed and has a chance to freeze through the grid.

Kyurem even offers a chance to debuff targets with Dragon Breath in addition to an impressive Sync Attack that can deal massive damage. Kyurem can help many teams, but is limited by the cost of Glaciate. Be ready with the gear or gauge mount to help this unit shine.

Morty and Mismagius, the leader of Johto’s ghost-type gymnasium, make a powerful supporting duo. Mismagius’ stats are nothing to scoff at, with both defenses hovering at 249 to complete an outstanding base kit that only gets better with the grid.

It’s one of the few pairs that can improve both defenses. They’re also stacked with self-heals via first aid and healthy healing grid tiles, a potion to heal teammates, and both Astonish and Confuse Ray to confuse opponents. This pair can fit into almost any team, unlike more limited support in Surge & Raichu, and is well worth your good BP.

Continuing the trend of helpful supports, Hop & Zamazenta offer similar buffs to Lt. Surge & Raichu, as they also increase attack, defense, and critical hit rating. However, unlike Raichu, Zamazenta has on-demand healing via Potion and tighter defense through his passives, Sentry Entry and Healthy Benefits (which increase defense by two ranks and reduce damage when at full HP respectively) ).

Hop also has his passive, Freevenge 4, which gives a 50/50 chance of his next move costing no gauges after being hit by a move; this allows for some respectable damage from this support pair via the 4-gauge Behemoth Bash. The extra bit of extra damage gives the formidable Zamazenta the edge over its BP counterparts.

Xerneas has made his mark in Competitive Battles, and he continues his reign in the Pokemon Masters EX support meta. One of only three supports with a buff-only sync move, Xerneas maxes his team’s Special Attack, Special Defense, and Speed ​​with a single Sync Move and can max Offense with his passive, Team Shout 4.

Xerneas’ area-of-effect healing over time and movement gauge boost make him a valuable team unit, but he can also sustain himself with his health-sapping horn leech. While already quite impressive, Xerneas will get even stronger once he receives his EX, as all EX support types gain an additional Sync Buff.

As one of the few open-ended Dragon-type damage dealers, Cyrus and Palkia are already useful by definition. However, even in the Pokefair and Master Fair limited unit pool, this unit still shines as a Dragon and Water-type powerhouse.

Cyrus can fully buff Palkia’s Speed ​​and Special Attack by trading half her HP, and can max out her own Critical Rate by using Spacial Rend combined with the Critical Focus 2 grid tile. Cyrus (and receiving his EX via an event) will only push his damage abilities further and give him the coveted AoE sync power for attackers. For the best results, give him a lucky skill Critical Strike 2, and it will stack with his passive to add to Critical Strike 11: a 110% increase in damage to all critical hits.

The original “best support in the game”, Skyla and Swanna maintain their incredible reputation with the team’s speed and defense buffs. Skyla’s fame comes from her potions having two MP refresh tiles in her grid, which makes their two-use cap a non-issue, with Skyla occasionally refreshing her infinite potion uses.

Skyla’s EX was also given out for free via an event, so she’s only the second free EX support, after Rosa. Factor in Skyla’s 250 in both defenses, her massive 813 HP, and her ability to flinch opponents via her Gust Staggering 1 grid tile, and it’s obvious why she and her fearsome Flying-type remain among the best.

The series’ most iconic and mysterious villain, Giovanni (from the enigmatic Viridian City Gym), teams up with one of Mewtwo’s most powerful Pokémon, and they live up to the hype. Like Skyla and Cyrus, Giovanni and Mewtwo have also been upgraded through special events, giving Mewtwo access to both an EX and a Mega Evolution.

Upon Mega Evolving into Mega Mewtwo Y, Mewtwo’s already stellar stats skyrocket: Special Attack increases from 520 to 623 and Speed ​​increases from 466 to 559. Mewtwo also gains his signature move, Psystrike, after Mega Evolving , and received no base power reduction from his Sync Move when receiving a Mega Evolution. To put that into perspective, all other Mega-Evolved Pokemon have reduced Sync Move Power. Mewtwo is easily one of the strongest raw attackers in the game.

The Kanto Trio debuted as limited-time Pokefair units, but have entered free-play territory. When introducing their Victory Road tutorial, DeNA gave players the free choice of one member of the Kanto Trio, with all three units being wonderful in their roles.

Sygna Suit Blue is widely considered one of the best supports in the game, due to incredibly high defensive stats, buffs to almost every stat, and healing. Sygna Suit Red is the epitome of a self-powered attacker: it boosts all of Charizard’s offensive stats on its own, has powerful AoE and single-target attacks, and a very useful grid. Finally, Sygna Suit Leaf features AoE Toxic, AoE Defense, Special Defense, and Evasiveness debuffs, as well as healing (not to mention powerful timing attack and block abilities that even knock Erika and Tangela out of the water. ). Whichever unit you select, your roster will have a powerful and versatile member for many battles to come.

NEXT: Pokemon: Quotes From The Games That Stay With You Forever

Andrew is a writer for The Gamer currently based in Los Angeles after studying screenwriting at New York University’s Tisch School of the Arts. He previously worked with Games for Change, promoting social impact games. He’s a huge Pokemon fan and loves to cook, but not the two together.