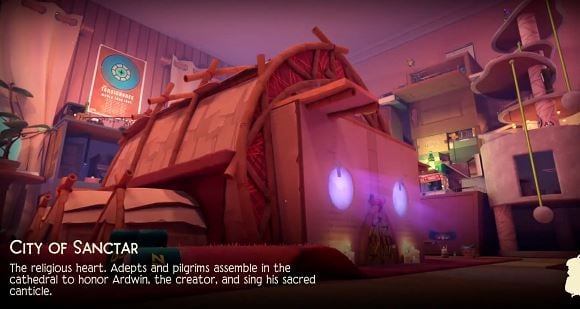 In this guide, we will cover the last level of the 1st world of Pac-man World Re-Pac.

At the beginning of the level, a flying ship will follow us and fire cannons at us. You just have to run straight and jump to the other platforms. If you slow down the cannons will grab you and reduce your health, so try to maintain your HP as you will need it in the boss fight. Once you complete the race portion, a cutscene will begin where Toc-Man will come and convert the flying ship into a boss.

Windbag will fire three cannons at the same time and there will be three orange buttons on the ground that you can press and this will activate a trampoline which will reverse the cannon fire at Windbag. At first you will have to dodge some shots from the Windbag cannons as the orange buttons will not be activated and once activated you will have to time the cannon shot and Butt Bounce on the button to activate the Trampoline so it can knock the cannon ball over. windbag cannon.

A reverse shot on Windbag will take 1 small bar of its HP and this boss has 10 small bars as full HP. The button you press will go into a cooldown, so you’ll need to move around and wait for Windbag to fire, then press the button to reverse the shot. Always hold onto the currently available button.

Once you lose half of his HP, Windbag will get angry and smash the ground. You will fall and you will then have 5 orange buttons. The Windbag cannon’s fire speed will also increase and it will jump to the other side of its ship and do a rapid fire at you with the cannons, so be sure to jump over the cannonballs to dodge it or hold you on an activated button to reverse this. Also try to catch the fruits and coins during the fight and when you exhaust all his HP a huge wave of fruits and pellets will come to you. Run across the platform to catch as many as you can.

After defeating Windbag, the level will be completed and you will unlock the 2nd game world named Ruins Area.