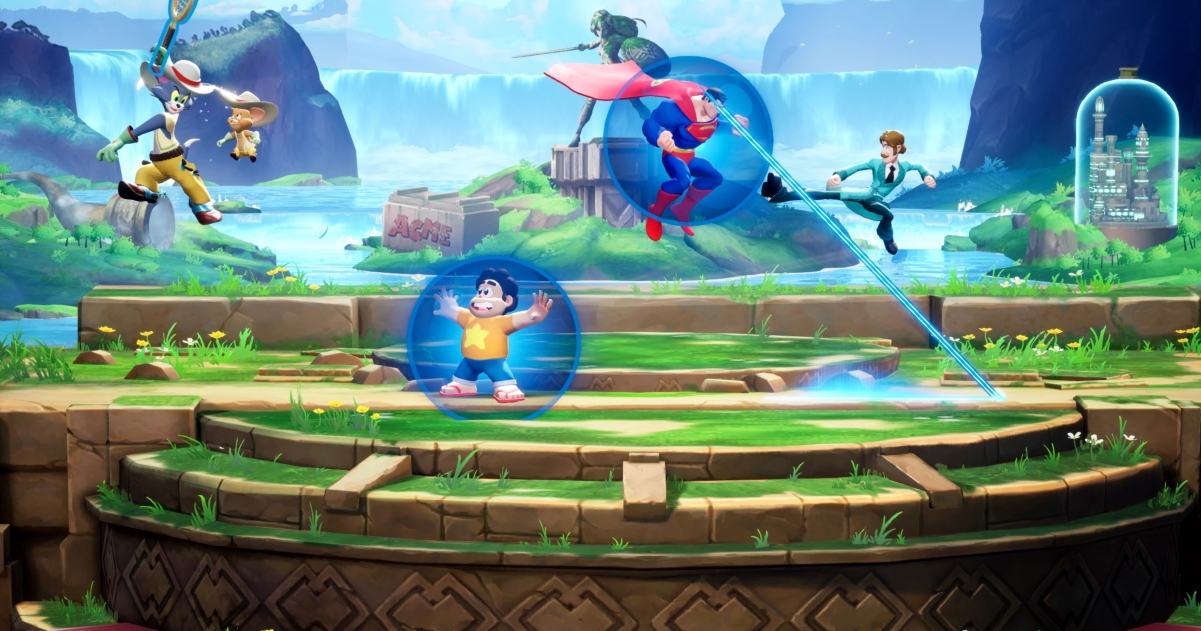 Retro: We finally have time to discover a title together at the same time! It’s incredibly hard to coordinate sometimes! The other day I saw that there was an Alpha test available to sign up for a chance to try Warner Bros’ new fighting game. called MultiVersus. This game pits characters from multiple WB properties against each other in a Smash Bros. kind of fight. I have always been a fan of looney tunesand DC’s animated superhero movies are pretty good, so I was curious to see if it would bring something new to the fighting game table that we haven’t seen before.

The day after I signed up for Alpha, I was lucky enough to receive a code, and with that, you were lucky enough to receive up to three more codes to give to anyone you wanted. After speaking with Artura, I knew this game would be a great topic to do a double-take article. One of the most exciting parts is the ability to do cross-platform multiplayer. Alpha didn’t have local multiplayer available, but by putting the game on two different systems you could still have a local battle; in my case the Xbox One and PS4 both have the game installed. Moreover, it also gave me the opportunity to play against Artura and Spooky_one online!

Looking at the character roster, it looks like a crazy mix of characters that you would never expect to see together; Shaggy and Velma from Scooby-Doo, Bugs Bunny and Taz, Steven from Steven Universe, Arya from game of thrones, and the superheroes Superman, Batman and Wonder Woman are just some of the characters available to discover. I thought there was no way Shaggy could stand up to someone like Wonder Woman, but I was pleasantly surprised! Each character has their own unique attacks that are true to their character, like Shaggy throwing sandwiches and Taz sprinkling salt and pepper on his opponents getting ready for a snack. I recently saw a leaked list of characters that may appear in the full game when released. I have to say I will be super excited if Godzilla is a playable fighter! 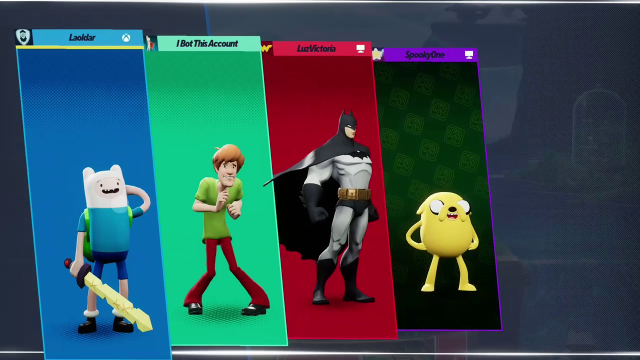 The game’s graphics are really cool and the characters, although traditionally 2D, look like themselves and not creepy 3D models. The colors are vibrant and the few steps we got to try looked really cool too. When I played alone against a bot, the game was not lag at all, but once I played online against Artura and Spooky_one, we had some lag times, so hopefully this will be resolved before the full game release. Although I have to say having a battle with the three of us and the bot all playing as Wonder Woman was pretty awesome and not as confusing as I expected. The game displays the character you’re playing as usual, but your opponents have a red tint, making it easy to spot where your enemies are. 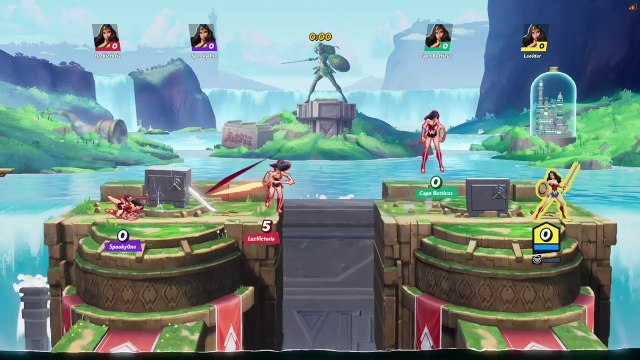 Game controls were very easy to learn with no tricky combos and if you’ve never played the game before or haven’t put much time into it, you’ll be able to engage in a battle with your friends while you fun . This is exactly the case when I battled online, they had been playing the game for hours and I had only completed the basic tutorial; I thought I was going to be destroyed! In fact, I was able to hold on and even win a few battles; I guess all my years of mastering the button-crush really paid off!

One of my favorite things was being able to play on the console of my choice. I like Smash Bros. on the Switch, don’t get me wrong, but if you’re playing with multiple people, you can’t all have the Switch Pro controller and you’re stuck with the Joy-Cons, it’s definitely not my controller of choice. I like using the controllers for the Xbox and PlayStation 4 a lot more, so I was very excited!

I had a good time playing MultiVersus, and I can’t wait for the full game to be released and I can battle against friends locally or online, no matter where they are or what console they’re using. Plus, there’s such a crazy mix of characters to fight that it’ll be fun to see their unique attacks and how well they fare against fighters from so many different franchises! It’s definitely a must-have title for me, even if the Godzilla rumors aren’t true. 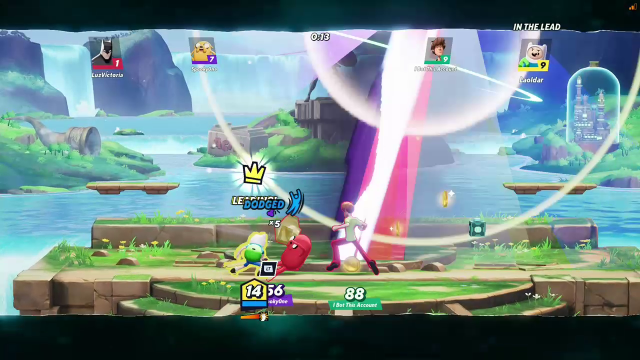 Arthur: Welcome to DoubleTake! I’ve been excited to do another one for a while, but the truth is, I’ve been incredibly busy. Luckily retrogamergirl and I were able to play MultiVersus and see how we felt about it Smash Bros.. competitor.

The Alpha test already offered 15 characters to choose from, as you can play as characters from the DC universe to famous cartoons, such as adventure time. Having Shaggy beat Superman shit with a sandwich while transforming into Ultra Instinct was a goofy and fun experience. One of the characters I didn’t expect to see in the playtest was none other than Arya Stark from game of thronesbecause it opened up the possibility for other great characters to join the mix (I secretly hope Tyrion Lannister becomes playable)! 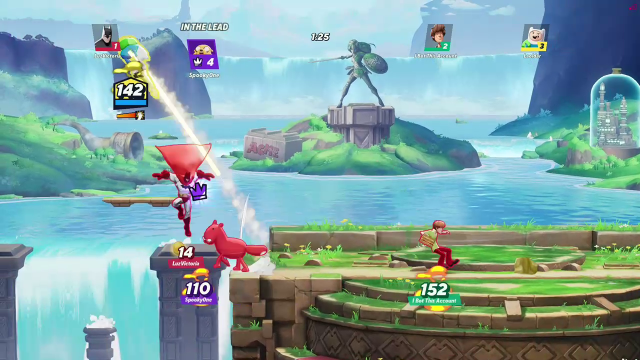 In my experience, after playing all the characters a few times to make sure I had a good grasp of them, they mostly felt balanced. I didn’t complain about any character appearances (apart from Bugs Bunny, fuck you, doc!). Although most of them feel balanced, I couldn’t say for sure that was one of the things I struggled the most with. MultiVersus was the lag.

Throughout my experience with the test, I couldn’t enjoy a single lap without excessive lag. Naturally, you could attribute this to me being in Colombia, but even playing in the South American region, I couldn’t get anything above a login bar. Enemies would teleport, I couldn’t see where I was going sometimes, and I would die because I didn’t know where the shift had teleported me. I hope this was part of the test and not that I was an isolated incident, because I would be heartbroken not being able to play the game when it was released!

Although most of the characters feel balanced, a trend has begun to set in with those cast. Players seemed to like picking Arya, Shaggy, and Garnet early on, with Superman joining the list of most-played characters soon after. Meanwhile, Reindog, Steven Universe, and Velma mostly went unnoticed, possibly because they were playing supporting roles. The most-chosen characters didn’t fluctuate much between modes, as they were chosen equally between 1v1, 2v2, and Free-For-All choices, but some characters became more prominent, such as Jake in 1v1. 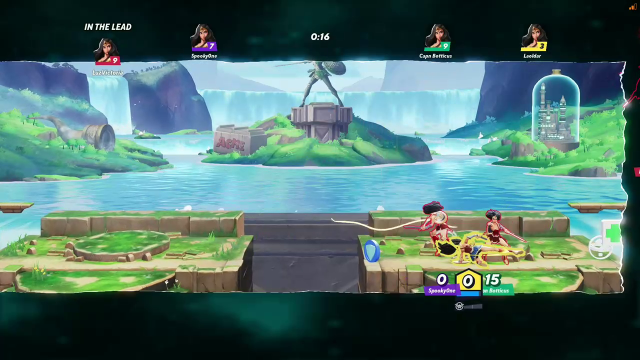 Each character has a set of traits they can learn, as well as the ability to train new ones for gold after reaching mastery level 10. These traits increase your damage with certain abilities or provide defensive bonuses to certain attacks, which was a good way to vary the style of play. That said, however, it was a bit lacking. The major trait of each of the characters is meant to be changing their playstyle so you focus on one of many ways to play them, but some weren’t quite as great, while others felt essential, which could be the difference between a balanced experience and dominant characters.

For the available modes, the playtest offered us the option to play 1v1, 2v2, Free-For-All, Co-op vs AI, and Custom matches. I spent my first day 1v1, most days playing 2v2 with my wife, and occasionally joined Free-For-All to get a taste of the game mode. 1v1 and 2v2 seemed to be the most balanced, although some characters lose their shine in 1v1, as MultiVersus was built around 2v2 mode; characters like Reindog and Steven Universe felt almost impossible to use in these. Not a complaint at all, as it makes sense that the game can’t be balanced around all game modes, but rather informative. Now the most disappointing game mode was Free-For All. Whereas 1v1 had two lives, 2v2 used a shared stock system where players can die a total of four times, which was a great system that I didn’t expect to like as much as I do. Meanwhile, Free-For-All prioritizes ringouts (taking your enemy’s life) as the primary form of point collection. While one player may have done the most damage, whoever got the most kills won the round, encouraging a loose style of play and stealing the kill from players.

Customs seemed a bit limiting, especially for a mode called “custom”. You can play between all modes, but you can’t actually choose the number of players or the handicap options. This was MultiVersus’ weakest point, as it really offers nothing but “co-op vs AI”; I was looking forward to fighting 1v2 against retrogamergirl and my wife, but that option was not available. 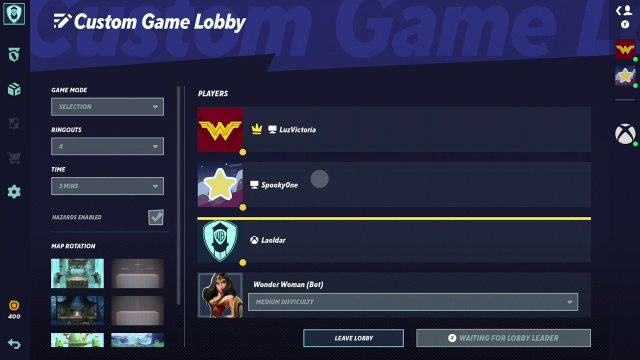 Despite this, however, MultiVersus is a phenomenal game, and easily one of my favorite releases for 2022 already. I had a lot of fun throughout my playtime, and I can’t wait to play more! Retrogamergirl gave me my money’s worth when we argued, but next time she won’t have the same luxury. See you on the battlefield, retro!