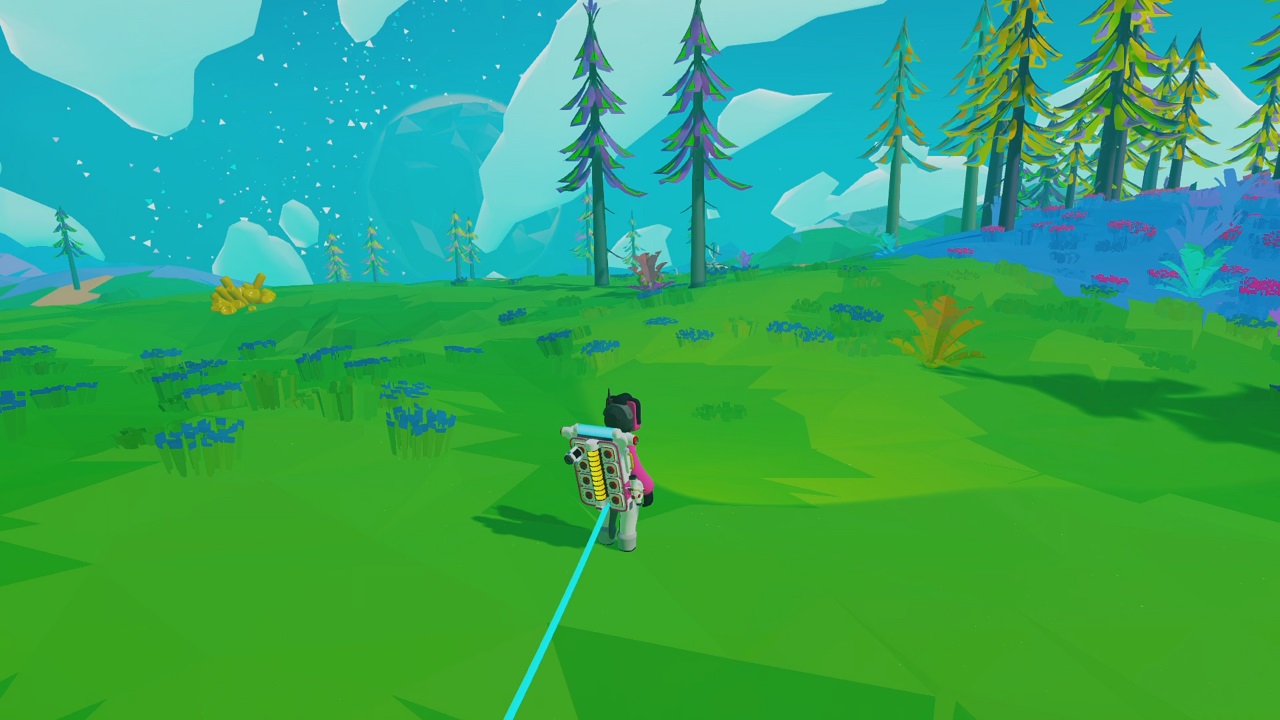 Astroneer has been around in finalized form since 2019 and in early access form on PC and Xbox since 2016, providing players with procedurally generated alien planets to settle in, harvest resources, and build their base of operations for. ever-expanding exploration. However, one of the biggest requests for the game was when it might get a Nintendo Switch release. In 2022, hopeful Switch gamers got their wish. The game has arrived in a more portable form on the console. While it feels a little odd to switch to a gamepad-only driven format like the Switch, the port works well and provides a relaxing sci-fi sandbox to explore, research, and tune.

Astroneer is a game in which you play as a little astronaut with the bare minimum on an alien world. You can play an adventure mode or sandbox in co-op multiplayer or solo out of the gate. Adventure mode is good for beginners as it gives you directions, missions, and tips to learn the game as you build your base and explore the planet. Sandbox is for those who are perhaps more experienced or just want to explore everything the game has to offer without any direction or mission. Either way, your job is to survive, harvest resources, and build your base so you can explore, harvest, and build in more elaborate ways.

Even with Adventure Mode, Astroneer can be a bit tricky to figure out at first. It has a tutorial and information center that you can access at any time with relative ease in-game, but sometimes the instructions it provides are very minimal. If you’re anything like me, you’ll probably spend a lot of time fumbling with your backpack, terraforming tool, or input options. This extends to trying to figure out what you need to create something, where it comes from, and how to do it as well. I think he could explain things better without overdoing it, especially in the early hours of the game.

It doesn’t entirely help that this game was definitely designed for a mouse and keyboard format. The translation of this is that a button brings up a mouse-like cursor to select items. Meanwhile, another button grabs the objects you target or puts them down. These work well enough, but when you have an object in hand, be prepared to struggle with the camera a bit. It focuses on the object rather than where you’re trying to turn or look with it and can be cumbersome.

That said, skip those early gripes and Astroneer becomes a very, very enjoyable game on Switch. The colorful, minimalist design worlds translate incredibly well to the Nintendo Switch and once you’ve mastered the controls and their quirks on a gamepad, traversing and building it becomes a silent, unintended waste of time. I spent hours checking missions, consulting my little Astroneer field manual, and figuring out what I needed to do next to make my base a little cooler and my life as a pioneer a little easier. I was always interested in the type of research and construction that followed and I could barely tell when an entire afternoon passed in front of me.

Much of Astroneer uses your terrain gun to both harvest resources and terraform the terrain. You can dig into the ground, fill it with dirt you have dug up, or level the ground. These are just three simple options, but they work pretty well, are very useful, and a lot of fun. There was a part where I fell into a deep hole far from my oxygen tethers – a slightly upsetting situation because if you die you respawn at your base and have to go grab whatever items were left on your backpack. Desperate not to, I used the terraform gun to punch a hole upwards through the rock walls and back to the surface. Where I had complaints about the cursor and grab functions at first, I like the terraform gun best because it works more like a third person shooter by design, which feels more intuitive.

You also get vehicles and I liked using a gamepad to drive them versus a PC mouse and keyboard. The rover, hoverboard, and shuttle perform well here and the game played beautifully while I had it in docked mode.

But what about Astroneering in portable mode?

I’m happy to say that for the most part, Astroneer performed very well when I removed the Switch from the dock and played in handheld mode. The colors are still vibrant and the game ran smoothly as I wandered the alien world on my expeditions and research.

The only thing I would say that takes a hit on Switch, especially handhelds, is when your base starts to get big and busy. As I expanded my base with bigger rigs and machines and the location got more complicated, I noticed that the frame rates usually started to drop when I was back in my colony. Given that this would have been a bit of an issue before and on better hardware than the Switch, I expect it to get even choppier as a settlement develops, at least in handhelds.

Other than that, however, exploring in Astroneer is a blissful breeze and you won’t find too many problems whether you’re playing on a dock or handheld with this one.

Astroneer on Switch in 2022 is a long-time request finally delivered. Apart from the occasional jank when things get busy in the handheld and some weird early learning curves from a thin tutorial and gamepad-friendly mouse controls, this game is one rich adventure. and pleasant in the unknown. Its procedurally generated planets have translated well to the Switch and whether you’re in Sandbox or Adventure mode, there’s so much to do between a planet and going beyond to other astral bodies. Keep your oxygen tanks handy because the Nintendo Switch version of Astroneer will let you discover planets far beyond the tethers of your couch and TV.

These impressions are based on a Nintendo Switch digital copy of the game provided by the publisher. Astroneer is available now on Nintendo Switch, PS4, PS5, Xbox One, Xbox Series X/S and PC via Steam.

TJ Denzer is a gamer and writer with a lifelong passion for games. He found his way to Shacknews’ roster in late 2019 and has been working his way to senior news editor ever since. In between news coverage, he also helps out with livestreaming projects like Indie-licious focused on indie gaming, Shacknews Stimulus Games and Shacknews Dump. You can reach him at tj.denzer@shacknews.com and also find him on Twitter @JohnnyChugs.