A first for horror games: the Outlast Trials tutorial is so scary I almost threw up 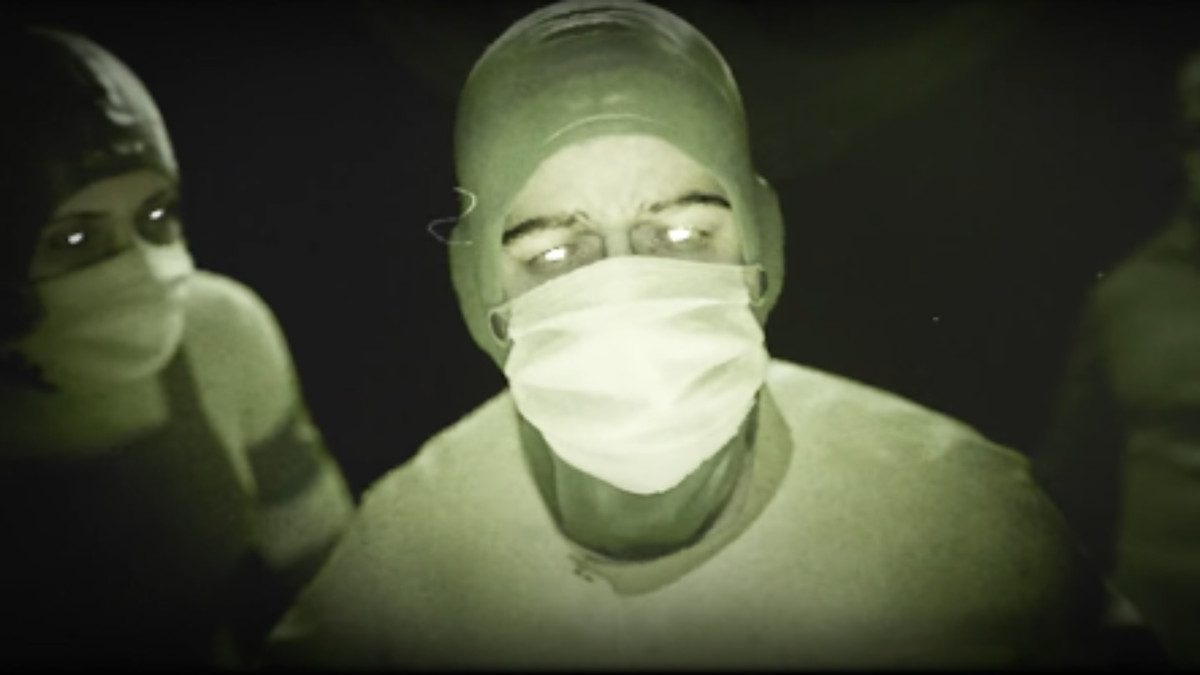 A first for horror games: the Outlast Trials tutorial is so scary I almost threw up

I run through the halls of a Cold War research center, desperately opening doors, hiding in cupboards and pulling any lever that seems to allow me to progress. Anything to put some distance between me and the lady at dinner with someone else’s face stapled to it. I know there’s a voice coming through the intercom telling me or trying to be philosophical, but I don’t give it the slightest notice. I can’t hear her due to my own screaming and hyperventilating.

All I have to do is grab that box of personal information and put it in the shredder, it’s pretty simple. So here I am, crouching and shuffling through the bloodied hallways like a sad, scared little crab.

I put down my box of documents, silently open a door, take it back and sneak into the doorway. Then I catch something out of the corner of my eye. I turn slowly to the right, look up and see a man covered in blood with a gigantic knife for an arm.

Before I know it, I’m racing down the hallway, chased by Edward Scissor-Hand’s long-lost brother. I have no idea where I’m going; not a single constructive thought crosses my mind. Before I can say “I feel sick,” another hideous resident pops up from the wall and throws a hallucinogenic vial at me.

I’m terrified, lost and about to vomit. Like, actually, at my desk, I feel like I’m going to be sick. Fear, excitement, hyperventilation. It’s all getting a bit too much. But eventually, I get to the shredder. I fill in my credentials and turn to the big red button at the end of the hall, my way out of this hellhole: The Outlast Trails tutorial mission. Finally, I can get into the actual game, the multiplayer.

From the moment I awoke to the distorted hellscape of Murkoff’s Outlast Trials installation, I immediately felt the raw terror of being alone. It’s this fear that I remember so clearly from the early Outlast games.

Each game opens with your character crossing an isolation threshold. Whether it’s climbing over the wall in a supposedly abandoned mental institution or flying through a cultist village, developer Red Barrels terrifies you by isolating you from the hope of any help.

In all previous games, you were armed only with a camcorder and some batteries, you have to fight your way through the nightmare relying on your wits. You have no help, no weapons and no friends. Outlast is a flight game, not a fight game.

So when I heard Red Barrels’ next Outlast game would be getting into multiplayer horror, I had some concerns, mainly if it could capture that well-known fear if you have company. If the horror came from isolation, surely being with four of your friends would hurt the mood?

I was wrong. Maybe I’m a scary cat no matter what, but I found the multiplayer in The Outlast Trials to be just as awful as the single-player mode.

Each trial is loosely based on your way through a dark, confusing maze filled with traps, locked doors, trinkets, and most importantly, larger-than-life enemies.

In the beta, along with a friend and a poor stranger we dragged along for the ride, I was tasked with carrying a “mole”. This Murkoff employee intended to leak company secrets, so as punishment he was tied up, blindfolded, and left for us to take him to the electric chair. While certainly ethically ambiguous, it made for some great horror content.

While one person was tasked with pushing the mole through the halls of Murkoff’s facility, my friend and I had to fend off any grizzly and murderous enemies that came our way. Using our wits, we had to distract the enemies as best we could so the mole could be brought to its final destination. To finish, my role as meat shield has been restored.

It’s not as easy as it seems. Not only do you have to traverse Murkoff’s back hallways to find keys to doors and crucial items, but you do all of this in the dark. Instead of having your trusty camcorder, you are given night vision goggles. Although you need to find stacks for this, you can also find health and stamina, as long as you look hard enough. However, your greatest asset is your special ability which comes in the form of “platforms”.

Each player has a choice of one of four abilities, health mist, x-ray vision, sound bombs, or blindness. X-rays let you see through walls, and in the dark, health mist can heal you and surrounding teammates after an attack; the stun bomb can temporarily stun enemies and blindness can release a cloud that will temporarily blind your enemies. Although each of these elements can be useful separately, they are designed to be combined to achieve the best result.

I must stress that the key to making these abilities work well is to use them in sync. Unfortunately, I didn’t know x-ray vision at first, so I didn’t know this skill was short-lived. Confidently, I pointed out the only enemy who was about to come behind a closed door so my friend could use his stun device to defuse the situation. Unfortunately, my preemptive call meant we were left defenseless when three other enemies attacked us through that same door.

When teamwork and everything else fails in The Outlast Trials, the only thing left to do is run. We left the only teammate we were supposed to protect and parted ways entirely. Not my proudest meatshield moment.

The unexpected result of creating multiplayer Outlast is that it makes the sting of isolation even sharper. After walking the halls with your friends, if you lose the group and find yourself alone with a figure running towards you through the shadows, it brings your vulnerability home. In this nightmare of a research center, it is easy to overlook the weakest link.